How Much Do Tree Services Cost in Harrisburg?

Harrisburg, Pennsylvania is home to a sizable population of shade trees. Local landscaping trees reduce air pollution, improve soil and water quality and increase property values. But to reap the full benefits of their trees, homeowners must maintain them. Here are the prices to expect when ordering professional tree care services in Harrisburg.

Tree removal is often more expensive than routine maintenance, though this is not always the case. Tree removal in Harrisburg costs on average $565, but the price could rise to $1,000 or more if the tree is very large or tall. Another key factor is its location. Can the whole tree be felled without causing harm to nearby structures? If so, this could dramatically reduce labor costs. Otherwise, it will have to be removed piece by piece, extending the number of hours required to finish the job.

After a tree is removed, the unsightly leftover stump must be disposed of. Stump grinding is one of the toughest tasks in the tree care business. In Harrisburg, contractors charge between $82 and $140 to remove a large stump, including grinding it up and, typically, hauling away the mess, too. $77 is the cheapest price reported for grinding up a midsize stump in Harrisburg.

Properly maintaining trees when they are young gives them a better chance of surviving and thriving to a ripe old age. Early structural and clearance pruning is particularly important for trees that will grow to be quite large. In Harrisburg, the average price for a tree maintenance service like pruning is around $350; some homeowners pay as little as $80, while others receive bills exceeding $600. The range of pricing depends on the type of service needed and the difficulty of the job.

Harrisburg, Pennsylvania is no Appalachian oak forest, but it supports the growth of many trees that would be at home in one. This Tree City USA has warm, humid summers and relatively mild winters. With a gentle intermountain landscape, moderate temperatures and fertile soil, the trees in Harrisburg enjoy a surprisingly hospitable climate for the latitude. 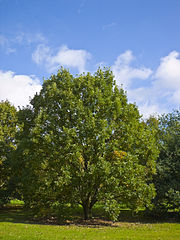 Harrisburg was once covered in dense oak-hickory forest. Today, some of the most common landscape trees planted in the city are:

Pennsylvania’s state tree, the eastern hemlock, can also be spotted around town. The iconic hemlock is a popular shade tree in Harrisburg. An aboriginal Appalachian, the evergreen thrives in the cool humidity that characterizes Harrisburg’s ecoregion.

Harrisburg doesn’t have its own urban forester presently. The Parks and Recreation Director oversees the City’s trees. Trees that shade a public right-of way such as a street or sidewalk fall under the City’s jurisdiction, even if they are planted on private property.

If a street tree is damaged or falls down, it is the abutting homeowner’s duty to pay for its maintenance or removal — unless it falls directly into the public right-of-way. However, the city may split the cost at its discretion. Seniors over age 65 are exempt from this ordinance.

It is illegal to harm a shade tree in Harrisburg. Moreover, no one is allowed to plant, trim or remove a street tree without a permit. In general, any installation, modification or obstruction of a City-controlled tree is prohibited without a permit. Tree removal permits may be granted on the condition of paying for a replacement tree.

Splintering or toppling trees are the most common causes of electrical outages. The utility company will conduct directional pruning or whole tree removals if it becomes necessary to clear the path for their electrical lines. It is recommended that city residents only plant new trees that will grow no larger than 25 feet at maturity, such as crabapples and magnolias.

Harrisburg lies in the Northern Piedmont of southeastern Pennsylvania, at the edge of the Blue Ridge Mountains by the banks of the Susquehanna River. Each of its seasons is pronounced, but not to an extreme. The city benefits from appreciable soil fertility nurtured by abundant underground limestone. Located in USDA Hardiness Zone 7, Harrisburg has a humid continental climate.

Purdue University reports the most widely grown tree fruits in Dauphin County are apples. There are also numerous orchards full of peach trees, and smaller numbers of pear and sweet cherry trees. Other tree fruits grown in and around Harrisburg include tart cherries, plums, nectarines and persimmons. Additionally, elderberry trees are native to Harrisburg.

Aspiring tree planters in Harrisburg should exercise caution when deciding which tree species is likely to survive and thrive here. Several tree bugs have infested Dauphin and neighboring counties.

Thousand cankers disease, a fungus carried by twig beetles, currently threatens the area’s black walnut trees. The arboricidal ash borer beetle has also thoroughly infiltrated Pennsylvania, with Harrisburg seeing its first detection in November 2013. Growers may want to hold off on planting new Ash trees until the problem is resolved.

Here are the plant hardiness zones for Pennsylvania as provided by the USDA: 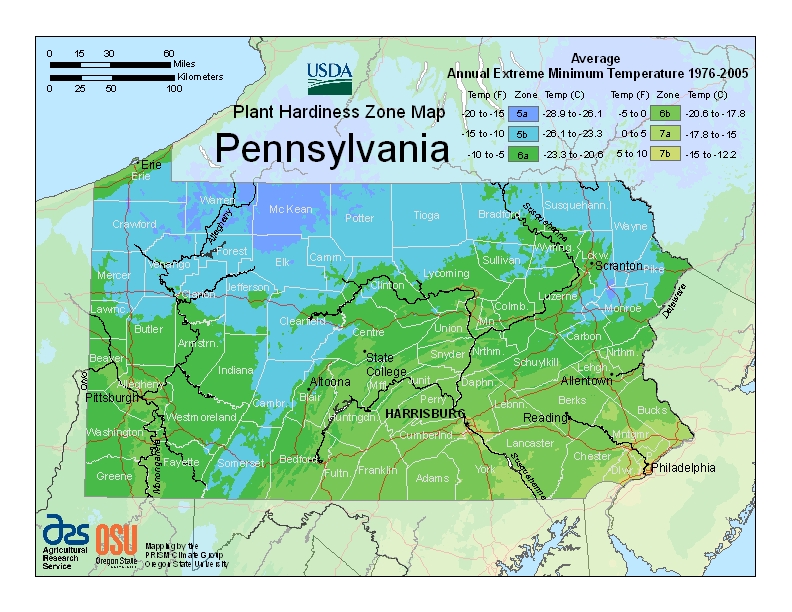