Guide to Tree Services in Winnipeg

How Much Do Tree Services Cost in Winnipeg?

For homeowners who are interested in the potential cost of tree services in Winnipeg, Manitoba, three primary types of services are offered: tree removal, stump removal and tree maintenance, which involves the trimming, pruning, and cutting of tree limbs and branches.

The average homeowner spends between $697 and $1,003 for tree removal service. Overall, the average cost of tree services is $850. The size and type of tree are major factors here as well as its position near homes and/or power lines. Taller trees, hard woods, and ones more delicately positioned cost more than removing large shrubs or clearing new-growth pines. A tree of any size located in a field well away from other structures will almost always be one of the cheaper trees to have removed.

Other factors that can influence the overall cost of the job include the handling of felled wood and stump grinding. If the trunk must be cut up and hauled away, that is an additional expense; however, it is possible for a homeowner with a hearth to make good use of a tree, providing they are able to split the felled wood themselves.

How Much Does Stump Cost?

Stump removal and grinding can cost between $82.55 and $139.75 for a large stump and are roughly the same for a medium stump. These figures include equipment delivery and transportation to/from the job site, worksite prep, including protection for existing structures, cleanup and debris removal, labor setup, mobilization time and minimum hourly charges. They do not typically include contractor fees or any fees associated with local permits

Regular tree maintenance costs are between $337 and $475, with the average homeowner spending $406. Even for trees and shrubs considered low maintenance, they still require some degree of care to remain healthy and look their best. In terms of regular maintenance, most tree services offer routine pruning and trimming as well as watering and fertilization. Some can even assist with pest or disease issues affecting trees on the property and provide information about common or potential local conditions and concerns.

Winnipeg is located in the prairie zone of Manitoba, which features trembling aspen (Populus tremuloides), also known as the white poplar, and balsam poplar (Populus balsamifera), according to Manitoba Conservation’s Field Guide: Native Trees of Manitoba. Here is more information about trees in Winnipeg.

For publicly own trees, citizens must request removal in writing and be able cite sufficient reasons for the removal, such as:

Based on the Forest Health Protection Act, in Winnipeg, it is illegal to prune elm trees during the late spring and summer. It is likewise illegal to store wood from the elm tree. Both of these activities contribute to the spread of Dutch elm disease. According to city regulations, stumps must be removed to approximately 6 inches below the grade. This removal should include buttress roots. An excessive amount of wood chips should also be removed, leaving a 4-inch layer of soil in the hole.

According to the City of Winnipeg, if a tree is too close to power lines, the city may prune or trim the branches so that they do not interfere with the lines or create a danger during inclement weather by downing the lines.

Elm trees cannot be trimmed or pruned from April 1 to July 31 due to DED. Tree removal and trimming should be conducted from August to the end of March, although ideally not at the very beginning or end of this period. 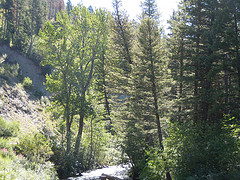 The tallest individual tree in Manitoba is a cottonwood tree called the Morden tree, which stands 30.5 meters high, according the Heritage Trees of Manitoba and recent remeasure of the tree in 2010. Cottonwoods in general have the potential for reaching not only great height but also tremendous girth and old age.

Among the smallest trees is the Amur maple, a dwarf maple that often standards only 5 meters tall with similar width. These are primarily found in small gardens as ornamental trees. It is a non-native species imported from Asia. Most trees native to Manitoba reach considerable, not to mention varied, degrees of height.

The provincial tree of Manitoba is the white spruce. Other varieties, both coniferous and deciduous species, are common to the region including:

Some hardy species of fruit trees will grow in Winnipeg; however, they must be fairly cold tolerant. Likely choices include apples, apricots, plums and pears. Dwarf species are also better options for a variety of reasons, including space constraints.

The elm is prone to disease and infestation, making it more difficult to maintain in good health. The ash also has difficulty with pests, especially the Emerald Ash Borer, which is a wood-boring insect originating in China and eastern Asia, which is not yet present in Manitoba but is a growing concern for forestry officials.

Since 1975, Dutch elm disease has affected trees in Manitoba. DED is a fungus that kills elm trees by blocking water conduction. This fungus clogs the vessels of trees that conduct water and cause wilting of the leaves, which eventually turn yellow and then brown. The disease is typically spread by the native and European elm bark beetles.

Cankerworms are another type of pest that affect local trees, including elms, ashes, Manitoba maples, lindens, oaks and non-native ornamental trees. Cankerworms are a type of caterpillar that feeds on leaves. The trees may be stripped bare and forced to grow an additional crop of foliage, weakening the tree and making it more susceptible to disease, according to Trees Winnipeg and the Urban Forestry Branch. These worms can be prevented with tree banding during the cooler months.