Denver and the Colorado Gold Rush 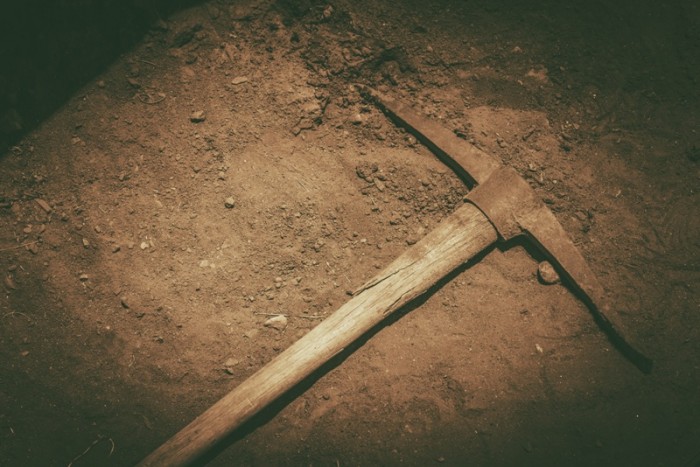 Denver, the largest city in the state of Colorado, is the result of a mining community that arose after the discovery of gold near Pikes Peak in 1858. This discovery led to a boom in gold prospecting and attracted many miners to the area. While very few struck it rich panning for gold, the community that grew from a few mining tents has become a bustling city, renowned for sports, business, and culture.

Discovery of Gold at Pikes Peak

Gold fever began in 1848 with the discovery of gold at Sutter’s Mill in California. However, by the mid-1850s, the excitement had died off, and miners began to listen for word of new gold sites.

In May of 1858, William Greeneberry Russell organized an expedition to the intersection of Platte River and Cherry Creek. He had heard rumors of small gold deposits, which had gone largely unreported in the wake of the California Gold Rush. To their delight, the mining party a small supply of gold in July. They promptly set up camps – one called Montana City on the bank of the Platte, and one called Auraria on the banks of Cherry Creek.

Pikes Peak, a tall mountain in the front range of the Rocky Mountains, served as a beacon to miners, despite the fact that it was not in the immediate mining area. Word spread about the fact that gold lay in the hills of Colorado, and in 1859, swarms of miners and fortune-seekers began to arrive and stake out their own claims to the nearby territory.

Miners looking for Gold in Colorado

It’s estimated that around 100,000 people made the trek to Colorado, encouraged by the optimistic voice of the Rocky Mountain News, which was produced by William Byers as an attempt to encourage business and keep morale high. A third mining camp, the St. Charles, grew at the junction of the Platte River and Cherry Creek to accommodate the influx of fresh miners. The settlers left camp and returned to Levensworth to register their claim on the land.

In their absence, General William H. Larimer arrived with a settlement party of his own. Finding that all the good land had already been claimed, Larimer did what any opportunist would do – he waltzed into St. Charles, bribed and threatened the remaining settlers, laid out streets, renamed the town “Denver”, and sent riders to Levensworth to register his claim before the St. Charles group could have the chance.

The decision to name the town Denver was a wasted one; the town was named in honor of the Kansas Governor James Denver in an attempt to curry favor for the shady deal, but Governor Denver retired before Larimer’s riders arrived. However, the men did manage to file the land claim before the St. Charles group, and so Denver was formed. Larimer wasted no time selling parcels of land in the town to merchants and miners alike, and over time, Denver became a major supplier for the surrounding mining area. Special focus was put into the development of a wagon route, and by 1960, Denver had a trail that cut travel time to only six days. Denver was now primed for development, and business thrived.

In 1860, the separate mining towns agreed to come together under the name “Denver” in exchange for a barrel of whiskey, which was shared among the new residents of Denver. The residential miners became known as “Fifty-Niners”, after the year of the gold discovery. By 1865, Denver City, as it was then known, was made the Territorial Capital of Colorado.

Before that, however, Denver was rocked by the outbreak of the Civil War in 1861. During the war, men and resources left to fight on their respective sides, and development of the frontier town slowed to a halt. Schools were comprised of whatever teachers, certified or not, were available, and saloons and public halls acted as a sort of public space for whatever organization needed them. A fire ravaged the city in 1863, with a flood following the next year.

When the war ended in 1865, Denver City restarted its slow development with the formation of the Denver Pacific Railway and Telegraph Company in 1867. By 1870, trains were pulling in and out of Denver, delivering more people, more supplies, and establishing Denver as an option for tourism. Denver had grown up from a simple mining town to a thriving business capital.

Once the railroad had been placed, Denver grew rapidly. By 1890, Denver was the 26th largest city in the United States, and was turning out $40 million in manufacturing. With the increase in money, however, came an increase in corruption. Denver struggled through the 1890s to keep gambling and crime under control, and suffered a crushing depression in 1893. However, if the end of the 1800s was a struggle, the beginning of the 1900s saw great positive change.

Movements for women’s suffrage, alcohol prohibition, social welfare, and charity organizations cropped up, accompanied by the development of formal job assistance, formalized schooling, youth programs, the development of juvenile court, and new public facilities. When World War I broke out, Denver contributed clothing, supplies, and soldiers, and expanded both the mining and agriculture sections of its economy to increase production. Prohibition was reinstated in 1916, completely banning all alcohol sales and consumption, and Denver saw corruption and bootleg liquor until the decision was repealed in 1933.

The Great Depression of 1929, coupled with a terrible drought in 1930, led to the closure of many mines and local businesses. Franklin Roosevelt’s New Deal of 1932 helped revive the city, and new government facilities helped increase both the jobs that Denver had to offer and the population size. By the 1950s, Denver began its expansion into oil and gas, which came into high demand in the 1970s. Through the 1980s and 1990s, Denver continued to streamline the city to better accommodate the high population, which was now over 500,000. Today, Denver continues to be a major center of business, but has also made a name for itself in the arts community, featuring public works from artists like Dennis Oppenheim and Shan Shan Sheng.