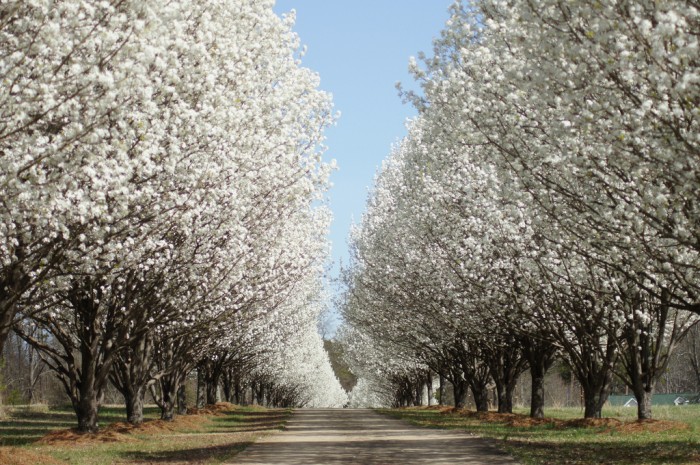 The Bradford pear tree, also known as the Pyrus calleryana or Callery pear, is a deciduous tree growing across much of North America. It’s easily identified by two things: its white blossoms and the rotting fish smell it can give off during the spring and summer. That’s why this plant has often been identified as a tree not to keep in one’s yard if you want to avoid power lines or yards being ruined during harsh weather conditions, or visitors quickly walking away once they smell it.

Here are some additional factors to consider when your Bradford pear tree starts blooming in the spring.

There are several downsides associated with Bradford pears that homeowners need to be aware of when deciding to keep or remove them.

While Bradford pears grow quickly to a great height of 40 to 60 feet tall, their branches are very thin, and they are quite susceptible to high wind conditions. For example, if winds happen to reach up to 40 mph or more, they can break and fall down into pieces on your front lawn or worse, the power lines nearby. This could result in power outages, a lawn in disarray, or in the worst case scenario, someone injured.

As aforementioned, the semll of Bradford pears is akin to fish rotting on a bank or the smell of sex. This is not the particular smell you want to walk out the front door to on the way to work. The Bradford pear has even been coined as the “semen tree” on Urban Dictionary for its atrocious odor. Consider how much you want to hold your breath from spring through summer to withstand this smell.

Bradford pears, while having very weak branches, are still really dense. This means that sun can’t get through the branches. So any grass underneath them won’t get the nutrients they need to grow. Unless you live in a climate where grass isn’t acceptable, like the desert, this probably isn’t something you want to deal with, either. It also doesn’t look good when you have brown grass and roots sticking because of the Bradford pear’s long rooting system spreading across the lawn.

A pear tree should be able to produce edible fruit, but the Bradford pear tree’s fruit is inedible. Humans can’t eat it, and worse, it can be poisonous for dogs. Dog owners who have these trees in their yard need to be sure to remove any that fall from the tree before their animal gets ahold of it. It’s also a problem for lawn mowers because of how hard the fruit is.

If you decide to keep the Bradford pear in your yard, here are a few of the best way to go about trimming or pruning them:

Be aware that the best time to prune or trim a Bradford will be when it goes into dormancy around the fall. Spring and summer is when new growth occurs, so only trim and prune then if there are branches getting close to the roof or power lines, or in the case of fruit about fall on the yard.

If you decide to remove the Bradford pear tree and replace it with a pear tree that’s stronger and has edible fruit, you can have the tree removed professionally for between $500 and $1000. However, because Bradford pears keep most of their energy in their shoots and roots, there’s a chance the tree can grow back. You can have the stump removed in such cases with the tree, or you can wait for the stump to decay by rotting it with chemicals and cutting it away from the ground. You can also dig up the roots and create a trench to level them out and pull the stump out as a DIY project. However, be aware this a very time-consuming project that can be decimate a portion of your landscape. So it may be easier to have it professionally removed with the tree at the same time.