The Founding of Phoenix, Arizona 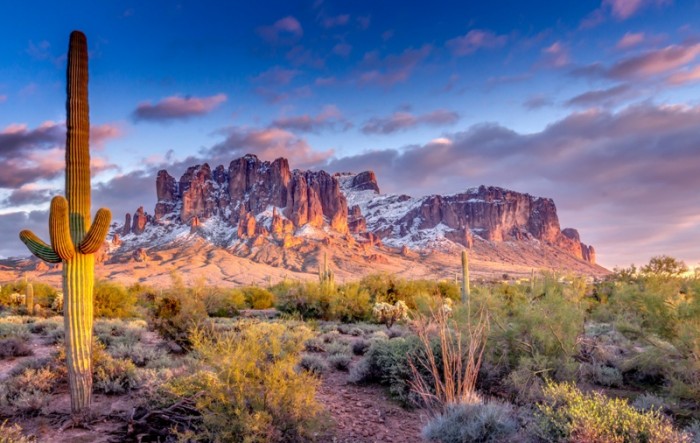 Phoenix is a vibrant city with spectacular scenery and an ideal climate for outdoor fun. The sixth largest city in the United States, Phoenix is the capital of Arizona. The people of Phoenix are made up of a variety of different cultural and ancestral backgrounds with each group contributing its own unique set of traditions and ways of life. Although comparatively young for a city in the United States, Phoenix has a storied past that is as intriguing as it is exciting. Phoenix played a significant role in making the American Southwest what it is today.

The first known settlers in the Salt River Valley region, where Phoenix is now located, were Native Americans. The Hohokam tribe flourished for a time, building a complex series of irrigation canals to supply drinking water and hydrate crops. Some of these irrigations canals are still in use. Possibly due to severe drought and subsequent flooding, the Hohokam abandoned the area sometime between 1300 A.D. and 1450 A.D. The Yavapai and Maricopa tribes settled in the Salt River Valley after the Hohokam departed.

Hispanic conquistadors invaded the Salt River Valley in the 1500s, bringing horses, cattle and innovative agricultural techniques. Traders, miners and farmers followed. After the Mexican-American War, the region became part of the United States. In 1865, Fort McDowell was built on the Verde River by the United States Army to subdue Native American uprisings. The presence of the military proved to be a turning point, encouraging the growth of non-native settlements.

A Confederate Civil War veteran, Jack Swilling traveled west to seek his fortune. On a visit in 1867, Swilling observed the Hohokam-built canal paths and realized the region’s farming potential. Swilling commissioned the building of a new series of canals that followed the path of the ancient system. Shortly after, a small community of people settled nearby. Named “Phoenix,” symbolic of the mythical bird that rises from ashes, the town was incorporated in 1881. Arizona became a state in 1912 with Phoenix as its capital.

From Frontier Town to Prosperous City

Phoenix, along with many other western towns, became known as raucous and rowdy. Saloons, gambling houses and a lawless atmosphere contributed to its well-deserved reputation. The arrival of the Southern Pacific Railroad in the 1880s was the first important step toward change. More efficient than wagons, rail service meant that products could go in and out of the region at a much faster rate. Phoenix quickly became a major trading center. New settlers found it easier to travel by train than wagon and a steady stream of immigrants began to arrive.

Significant technological advances in the late 1800s and early 1900s contributed to the growth in population. The Theodore Roosevelt Dam was built between 1905 and 1911 as a water irrigation system and flood controller. The invention and widespread use of air conditioning improved the quality of life, making it possible for people to live comfortably in the hot climate. More recently, the completed construction of the Central Arizona Project (CAP) aqueduct system delivers water from a number of sources, including the Colorado River, to Phoenix and the rest of the central Arizona region, fueling robust agricultural and industrial development.

Phoenix is a city of growth and opportunity. A culturally rich metropolis, Phoenix is home to music venues, museums, world-class cuisine, universities, colleges and professional sports teams. What was once a rugged frontier town is now an important business and cultural hub. Meeting challenges is part of the history of Phoenix. There is no doubt that it will continue to rise above them and prosper.

The History and Founding of Phoenix