From Tree to Table: How Maple Syrup is Made 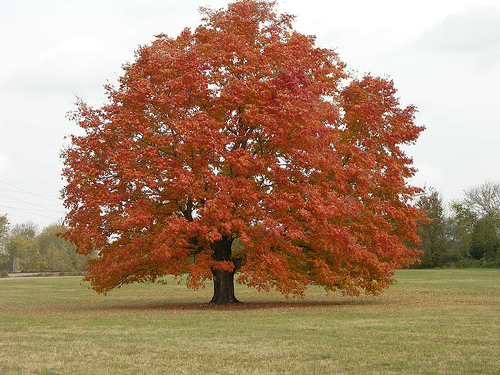 Without maple syrup, waffles, pancakes, French toast, and oatmeal just wouldn’t be the same. This sticky goodness graces most of the cupboards in North America, and can even be used as a sugar substitute in many recipes. But where does it come from, and how does it get to our tables in time for breakfast?

The History of Maple Syrup

The history of how maple syrup was first produced remains a mystery. It is clear that Native American tribes, including the Abenaki, Iroquois, and Micmac were making it as early as 1557. Their process involved collecting the sap from maple trees, putting it in birch bark bowls, and heating it with hot rocks to thicken and preserve it. The Native Americans used maple syrup much as we do today, to sweeten their foods and drinks. By the 1700’s, the French had arrived in North America, and the process for making maple syrup was honed into a yummy form of art. Even with all our modern innovations, we still make maple syrup much as they did over 300 years ago.

How Maple Syrup is Collected

Once a maple tree reaches 10 inches in diameter, which takes about 20 to 40 years, it is sturdy enough to be tapped for its sap without damaging the health of the tree. At maturity, maple producers (known as sugar makers), drill a small hole in the tree. This is called tapping. Into the hole, the sugar maker inserts a tube or spile and attaches tubing or a bucket to collect the sap that spills out.

Only a small portion of the tree’s total sap is collected, and when the tapping is done with care, the tree heals within a year or two. A careful sugar maker can use the same tree year after year without harming it. The sap collected is 98 percent water, and only 2 percent sugar. It must be processed immediately to keep from going bad.

How Maple Syrup is Prepared

The sugar maker takes the collected sap back to the evaporator. The evaporator unit is a series of pans, which are filled with sap and heated to boiling. This process reduces the water content, thereby making a sweeter, thicker liquid. At 7 degrees above the boiling point of water, the sugar maker removes the sap from the heat. It takes about 40 gallons of maple sap to produce a single gallon of maple syrup. The syrup is now 33 percent water and 67 percent sugar.

After boiling, the syrup must be filtered to remove the sugar sand. Sugar sand is a collection of minerals that makes the syrup cloudy if not removed. Then the sugar maker can fill bottles or jars with their syrup and use or sell it. Many sugar makers also produce maple sugar, candies, maple cream, jellies, and other goodies with their syrup.

Where Maple Syrup is Made

Of all the species of maple, sugar maples are the best for producing syrup. However, the red and black maples also produce a similar syrup often marketed in grocery stores. But weather is an important factor, and many states with abundant maples aren’t syrup producers because the weather has to be perfect to make good syrup.

The best areas for syrup production are Canada, New England, the Great Lakes area, and parts of the Mid-Atlantic where temperatures dip below freezing regularly. Sugar makers look for nights below freezing and days above freezing for collecting. The best time is generally mid-February until early April.

Fortunately, the abundance of maples in these regions allows sugar makers to harvest plenty for year round use all over North America.